It’s Valentine’s Day and that’s the theme of our #52ancestors challenge this week.

John and I don’t celebrate Valentine’s Day, but we did promise this morning to “notice” each other today.  Ha ha.  Since joining his Moxon family some 32 years ago, I’ve developed the Moxon weird sense of humour.

And why don’t we celebrate it?  Simply because it’s become so commercial, b) red roses are imported at this time of year, environmentally damaging and the cost is astronomical, and c) every day can be Valentine’s day.  I’d rather receive flowers at other times, and did so last week, a heartfelt thank you for visiting my dearest in hospital the week before.

But today, I’ll tell the story of my parent’s courtship and marriage.

Bob Tucker met Freda Smith maybe 1938-39, but he truly doesn’t remember being set up on a triple couple date by the Matron of the Church of England Boys Home at Carlingford NSW.  Bob was a Churchie old boy, living in the working boys’ hostel, and Freda was a domestic worker/assistant house mother at the Homes.  Freda remembers the outing well, telling me my dad fell asleep during the movie.

Time passed: Freda moved on, travelling to see relatives in country New South Wales and Victoria, and then obtaining a live-in position as a companion to a dentist’s disabled wife in the old gold mining town of Ballarat, Victoria.  By this time, it was 1942 and she was meeting American soldiers stationed in Ballarat.  Some of them quite handsome, so she said.  I don’t doubt it.

Meanwhile my father Bob was in New Guinea fighting the Japanese.  He was a signaller in the Australian Infantry Force’s 2nd/14th Division.  Home on leave in 1944, he met Freda again.  Coincidentally she had worked in the early 1930s with my Aunt Cecily, dad’s sister at the Bowral YWCA.  And they must have renewed their acquaintance, developing into a reconnection with Bob.
Sometime later in 1944, before he was sent with the Army to Bougainville, he visited my mother in Ryde with his mother, Edith Tucker.  Mum was managing a subscription library for a friend.  Those were the days before local government set up free libraries.

As usual, my grandmother asked Bob if “that’s the sort of girl you would like to marry?”.

And my father said: “That IS the girl I’m going to marry.”

So very shortly he went off to war, having reached an understanding, as they used to say, about the future.  I don’t know the ins and outs, not that I wanted to know.  But their war correspondence discusses Freda choosing a ring, and much dreaming about the future.  Bob wanted to set up a river barge on the Murray selling seedlings (he was a horticulturalist), but Freda subtly talked him out of it.  Luckily for us, since he was no businessman.  Too soft with no enthusiasm for chasing up bad debtors.  He preferred to work for wages.

Dad returned from Bougainville just before the war ended, in April 1945.  The Army released him early to return to his former employer who kept insisting he couldn’t do without him.  But I suspect there was more to the story – Dad had rather too many close encounters with the Japanese.  Not long before his release, he had crawled very close to the Japanese camp to repair a broken cable, according to one of his army mates sixty years later. 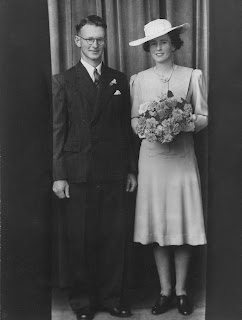 In March 1946, Bob and Freda married simply and quietly at St Anne’s Church of England, Ryde NSW and spent 58 (mostly) happy years together until Freda’s death at age 92 in 2004.  And I’m eternally grateful for their giving me and my brother and sister such a happy childhood.