I’m guessing that this photo was taken about 1918 when high-waisted dresses became fashionable for a short time. It is obviously a studio photo and was captured in Southampton, England.  Then again, I wonder if the dresses are black, meaning the photo was taken the following year and the girls would be in mourning.

The young girls in this photo had no inkling that within one or two years, their lives would be much different.  Already war had impacted two of them - their father Sydney George Tucker was in the Parkhurst hospital on the Isle of Wight during the whole of 1918, recovering from serious war injuries sustained on the Western Front. The other’s father, Alexander Stuart Kennedy was playing cricket for Hampshire as one of the top English wicket-takers, taking on coaching engagements in South Africa and hoping to play test cricket for England.
My dad, Bob Tucker had two older sisters - Jessie Agnes, born 1908 and Cecily Mary, born 1910, both in Southampton.  They were lucky enough to have a cousin, Mary Stuart Kennedy, also born in 1910 and also living in Southampton.  Mary was always known as Molly.  The two sisters are standing on either side of Molly, seated.
The girls’ mothers were two of six Reed sisters, Edith Annie Tucker, fifth born child and fourth daughter of Robert Henry Reed, and Jessie Kennedy, the sixth daughter, and youngest child of Robert Henry Reed (1856-1915).
In 1919, Jessie (junior) and Cecily’s father returned home from the Isle of Wight but it was evident to his family that he was seriously disturbed with shell-shock. He fell off the City Walls, maybe deliberately, injuring himself, and was taken to the Southampton War Hospital where he committed suicide, three days after being officially demobbed.  This wasn’t recognised as a consequence of war until much later so Edith Annie Tucker did not receive a war widow’s pension at first.  Her civilian widow’s pension, based only on his pre-war cash wage (not the in-kind support from his employer father) was not enough to sustain three children.
Seeking relief from her parish, Edith was encouraged by the vicar to put the girls into care at St Paul’s Home in Chelsea, London.  This home closed so by 1922, the girls were taken in by The Dr. Barnardo’s Home for Girls in Barking. Meanwhile, Edith Annie kept my father with her and during the 1921 census, she was described as a confectionary business manager, working with her widowed mother to trade out of debt after their master baker father died suddenly in 1915 owing a large debt to the bank.  I’m told by my second cousins that their grandmother Jessie Kennedy was a talented cake decorator.
Meanwhile Molly’s father Alec Kennedy was successfully becoming an all-round top cricketer and by 1920 he, his wife Jessie, and Molly sailed to Cape Town where he coached and played one series of five Tests for England against South Africa.  Although a highly successful medium-speed bowler and a good batsman, his style was somewhat unorthodox and controversial and this was probably the reason for his not playing more Tests for England.
I found a postcard amongst my father’s memorabilia addressed to him aged 6 from his Aunty Jessie.  Here it is: 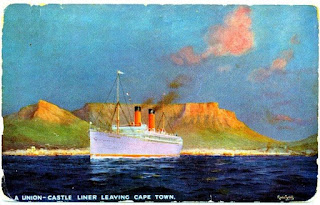 Sadly, by 1923, although another daughter, Jean was born in Cape Town, Jessie and Alec’s marriage disintegrated. As the wronged partner, Alec was entitled to custody of both girls but left baby Jean with her mother.  By 1926, Molly sailed for England with her father who resurrected his cricket and coaching career and didn’t return to South Africa until 1947 by which time Molly was raising her first son with her husband John Priestley Palmer.
Meanwhile, Jessie and Cecily Tucker were encouraged by Dr. Barnardos to migrate to Australia in 1924.  They were followed to Sydney in 1925 by their mother and 10-year-old brother (my dad) the following year.  I know my father remembers his Aunt Jessie and her girls meeting him when the ship arrived in Cape Town on their way to Australia.  Apart from Cecily about 1978, the Tucker family were never to see England again.
And as far as I know, Molly never saw her mother again after she resettled with her father in Southampton in 1926, aged 15.  My second cousin - another Alexander who was Molly's son - showed me a photo that I could identify as a farewell keepsake from Mother Jessie to her daughter.  Here it is. It is inscribed "To Molly with heaps of love from Mum and Baby" 26-3-25, and a verse:
"Be good sweet Maid
And let who will be clever
Do noble deeds, not dream them all day long."
Mum
The quote was originally from the poem A farewell by Charles Kingsley (1819-1875).
Posted by Margaret at January 15, 2022