C is for Corfe Castle

After a very interesting couple of days in Weymouth, where we had been joined (in separate accommodation by second cousin Linda and her husband Peter, we all decided to head back east to Sussex (Linda) and Brockenhurst, Hampshire (John and me).  However, it was the perfect opportunity to visit the village where one of our mutual ancestors lived.

A medieval market re-enactment was taking place on the day we visited in May 2014.


My 2xgreat-grandfather, Aaron Hardy, a mariner was born in Corfe Castle, Dorset in 1826 to William Hardy, a labourer and his wife Mary (Whiterow/Whitrow). His mother died less than three years later.  William continued to live there and was a carpenter in 1850.

Corfe Castle was built by William the Conqueror as a fortification on the Purbeck peninsular, and the village below has the same name.  In Elizabeth 1's time, it passed into private hands. During the English Civil War, Cromwell's men "slighted" the castle by destroying much of it, making it non-functional as a fortification. 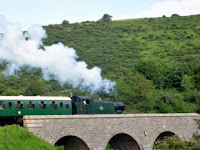 Today, many tourists arrive by train for day-trips.

By 1841, young Aaron was a male servant in Radipole, Dorset. From there, it was less than a two-mile walk to Weymouth Harbour, so it is easy to imagine Aaron meeting Amelia Billett at the Old Harbour before 1850 when they married.  By then Aaron, like his father-in-law William was a mariner.

Our great grandparents Agnes and George W. Tucker must have been mortified when two years later Aaron was charged with being drunk and disorderly, having been held in the police lock-up overnight.  By then he was a labourer, not a mariner.  I have not yet been able to find records of any ship he served on.