D is for Downton

In 2002, I retired from the NSW Public Service but for a number of years, worked part-time for the Australian Seniors Computer Clubs Association and assisted my husband John with his busy consultancy.  So it was 2008 before we were able to go overseas for the very first time as a couple.  Our travel had been limited to every Australian state prior to that.

By 2005, I'd commenced researching our family history, so planned our first overseas trip to the lands of our ancestors. I was very keen to meet Linda, my second cousin who shared my maiden name and John, being 75% Irish heritage, wanted to visit Ireland.

We hired a wheelchair-accessible motor home for 11 weeks and toured both England and Ireland. Unfortunately, I had to drive - five on the floor and huge - but only nearly killed us twice. 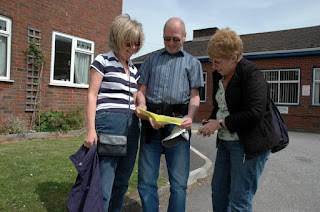 Downton is a village where many generations of our Tucker ancestors lived so we timed our visit to the annual village Cuckoo Festive, held in early May. My cousin Linda who we'd met in London for the first time a few days earlier was also keen to go. So she and her husband drove two hours to our campsite from Horsham, West Sussex and we all went together in the motor home.  I only jumped the clutch once.

We found parking quite easily in the schoolyard (disabled parking only) and joined thousands of others in the village.


We missed the maypole dancing but caught the hoop dancing and the Morris dancing.

We had a beer in the King's Arms where a secret passage led to the neighbouring St Laurence Church.  During Tudor times, the Catholic priest could be hidden in the pub if necessary.

St Laurence Church (1150) is very interesting. My 5th great grandfather William Tucker was married here in 1761, and many of my ancestors and their siblings were baptised or married there.

Linda and I have ancestors from Downton with surnames Tucker, Goulding, Rice, Shergold, Bailey/Bayley, Curtis, Hill, Edsall, Humby, Wheeler.  I'd say many of them are buried at Downton too.

The village is very picturesque and the villagers obviously very proud to live there.  Being close to Salisbury, many well-off retirees have probably moved there, and younger people commute either to Salisbury or to the south coast cities for work.

It was one of the highlights of our first big trip.